Indonesia confirms the sinking of the submarine by locating several fragments

The objects found come from inside the submersible, which has been detected at a depth of 850 meters A prayer mat used by the crew to pray the Koran, a fragment of the torpedo system and a bottle of grease used to lubricate the periscope were yesterday the stark confirmation of the sinking of the KRI Nanggala-402. In the same waters where its last contact was recorded on Wednesday morning, the objects that appeared floating and the signal detected at 850 meters depth hardly served to confirm the tragedy that the Indonesian Navy had already feared since the submersible disappeared without a trace. a few minutes after his dive to start a military maneuver 100 kilometers north of Bali.

“Based on the elements from the KRI Nanggala-402, we have changed the status of the submarine from ‘missing’ to ‘sunk’,” acknowledged, with visible discomfort to the media, Yudo Margono, chief of the Navy. As the recovered remains come from the interior, it can only be presumed that the submarine has suffered irreparable damage, which vanished last night the chances of finding some of its 53 occupants alive, who would have also run out of oxygen reserves early yesterday morning. in the morning, according to the most optimistic estimates of the authorities.

Yudo explained that the objects located “could not have left KRI Nanggala-402 without external pressure or without damage to its torpedo launcher system.” Hence, the most solid theory that they shuffle is that the submersible’s steel hull could have been smashed into pieces when falling to depths greater than 800 meters, judging by the sign that it would lie at 2,790 feet, since it was designed to a maximum dive of 250-500 meters. 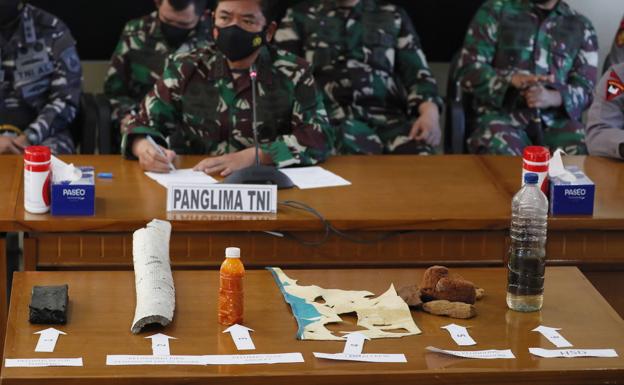 Although the chances of finding the people on board alive are remote, the Indonesian Armed Forces have not yet declared the crew dead. In fact, Yudo himself suggested this Saturday that perhaps some of the occupants could isolate themselves in rooms that are still intact. Even so, at the same time he acknowledged that, although the search will continue, a rescue in such deep waters is a “very risky and difficult” task.

In addition to establishing a chronology of the events and determining the causes of the accident, it will now be the investigators who will have to evaluate the viability of an unprecedented rescue operation. “It is technically possible to do so, although I think Indonesia will have to request foreign aid,” said Collin Koh, a member of the Institute for Defense and Strategic Studies.

The authorities have already had to appeal to the solidarity of other countries to deploy the extensive search operation, in which dozens of boats, helicopters and hundreds of troops participate. Two Australian frigates joined the work this Saturday, a rescue ship from Singapore, this Sunday another will arrive from Malaysia. India has sent a specialized deep-sea rescue submarine and the US has deployed the Boeing P-8 Poseidon, a state-of-the-art aircraft designed for anti-submarine warfare missions and vessel interception.

Frans Wuwung, a retired rear admiral in the Indonesian Navy, gave credence to the hypothesis that the KRI Nanggala-402, the oldest of the five operating in the country, could have suffered a power failure. “A blackout means that you cannot move,” he told the MetroTV channel, assuring that he suffered one in 1985 in the same submarine, manufactured in Germany 44 years ago.